Another chapter in the history of the KKK 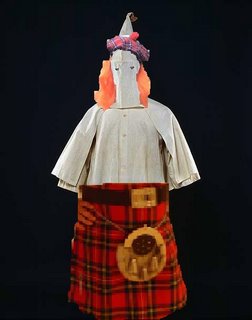 Kick Racism Out Of Football is an excellent and worthwhile project. It is as ridiculous as it is anarchic and distasteful that racism still exists in the beautiful game. And whilst large scale racism is primarily found in the domain of Spanish and East European football the latest racism in football story is from the UK. During Gretna's surprise 2-0 defeat at home against Airdrie the introduction of the St Kitts and Nevis Under-20 international (yes, I've done my research) Matthew Berkeley was met by some Airdrie fans donning KKK masks.
How f*cking brain-dead is this? Almost as brain-dead as the police who are investigating the matter but have, as yet, been unable to identify the culprits. Raydale Park, the home of Gretna, holds a massive 3000 and the attendance on Saturday was 1492. So the ground was less than half full. Chief Inspector Stewart Wilson, the Hamish Macbeth of the scene, said "these supporters were pretty boisterous and moving around a lot". How very unsporting of the racists not to stand still.
Hopefully, these bastards will be caught and banned for life.

Comments:
but they all had masks on...

besides, don't they all look the same?

I find the attachment of red hair in your image offensive.

Is it now OK to categorise 'jocks' and their ehnic coloring as a joke? you are no better than the racists you try to bring our attention to in the Airdrie/Gretna article.

Not only that, our very misguided savior of our morals decide to put his image in a kilt, as obviously all us north of hadrians wall run about in skirts all day.

If anyone has shown his/her self to be a racist, then BB has.

What a racist scumbag BB is.

there's a difference between racism and stereotyping. just a minor quibble.