The Butler and the Hoff 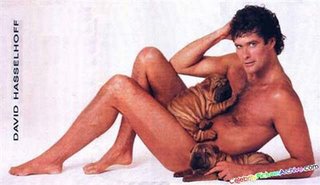 Frankly, I couldn't care less about David Hasselhoff and his renaissance in the eyes of the Great P*ss Taking British Public. Yes he was the main catalyst in the fall of the Berlin Wall and the subsequent death of East European communism but really? Hasselhoff? Who cares?
And then there's Paul Burrell. Celebrity, butler, scholar and gentleman. This man's role as a peripheral, if persistently omnipresent, celeb is a good argument against reality TV. I firmly believe this man would sell his soul for media coverage (and then probably nick it back).

So in a Celebrity Death Match to die for, it's Hoff vs. Burrell. And which iconic figure could be the reason for this spat? There's only one: yep, it's the Daily Express' (not to mention the nation's) favourite: Lady Di, the Princess of Hearts.
Hoff, the deluded self-obsessive narcissist, has claimed that Lady Di fancied him something rotten. This is, of course, a total non-story, which necessitates the role of the Butler who has sprung to his former boss' defence claiming Hoff is speaking bunkum saying: "There was never, ever any hint of any date or romance between the two of them. Such a suggestion is as far-fetched as a talking car called Kitt" or your celebrity career.
"The signed photo was of him in his Baywatch pose – all trunks and hairy chest...I remember the princess laughing hysterically at the photo and turning her nose up." At the same time? That's even more impressive than licking your elbow.

Comments:
Please can you launch a competition on your blog to find a Burrell lookalike? I reckon it would be fun.

It sounds good but a mole has told me that there would be no contest were there to be a lookalike competition.

It's got to be the Hoff every time. He's got massive hands and a chest like a bear.

Lord Lucan: Do you mean to say that a Mole is a spitting image of Burrell?