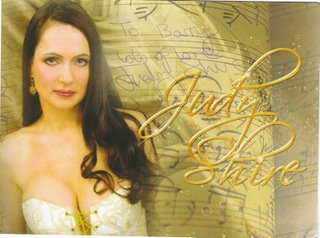 After a few drinks in a pub in Northampton on Saturday it was decided to go to a local jazz club. Nice! Well when in Rome (Northampton)...
So a few drinks down the crew saunters along to the Black Cat jazz bar and upon entering are surprised to see that it is totally empty. Not even tumbleweed. We are advised that there's a gig upstairs. So up we totter (some tottering more than others) and up on the stage is Judy Shire. Never heard of her? Me neither.
It wasn't that she was bad, but rather she wasn't very jazzy. I envisaged someone like Jay Kay but this was more lounge singing. After about a pint, my girlfriend pointed out that a shadow in the shop opposite looked very much like someone was being hanged. Bemused I looked for a while trying to figure whether it was moving and when I turned around...bang there she was Judy singing to our table.
A fine quality evening followed with such classics as Fever, Cry me a River, I Put a Spell on You and Walk on By and, even better, an incredibly drunk Aussie bird with her husband who was the spit of the late Roger Cook.

Gig finished there was the inevitable call of 'encore' and to her credit just after the 'en' bit had left our mouths she was off. She didn't need asking twice. Anyway the above is a signed promo flyer and, well, that's quite a figure. As someone comments on her website: "Judy sings like a Lark and is smoking." Not as in Marlboro Lights, I assume. Another belting testimony was this offering from soneone in Houston "When we first heard Judy Shire I said to my husband is that Alicia Keys he said no this girl is a much better singer." Hmmmmm, Houston we have a problem.
She is playing in Reading next weekend and I would recommend it highly.

Yes he has.
Sorry to break the news to you like this.

Thanks for your nice words Barry and I am pleased you liked my gig and my figure. Not sure about the lounge singing I think you missed the 1st half which was all Jazz and I have to say you look much younger and better looking in the flesh !!