Wembley planners have their balls in the air 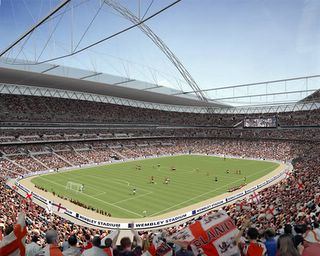 We're not on our way to Wembley

I don't think you needed a crystal ball to predict this one. Indeed, it is the least shocking story since the last time it was delayed. For those interested, the initial completion date was Autumn 2005.
The F.A, that most fabled and illustrious of British institutions, wanted 100% certainty that the stadium would be ready and presumably Multiplex could only answer they were 100% hopeful it would be ready, which obviously cut no ice. The F.A, being no fools, realised that you needed a pitch and some seats to host a match and have consequently fallen back on the reserve option of the Millenium Stadium.
Still what do you expect for £757m? No marks at all if you say a world-class stadium ready and operative on time, but full marks, gold star and top-of-the-class honours if you answer: loads of disputes between contractors and legal teams putting the project further and further behind schedule and also £757m is a bit on the skinny side so spiralling steel costs coupled with all these delays are likely to push the price of the stadium beyond £1bn.
Whilst researching this post (why not?) I discovered two nuggets:
1) Multiplex will be penalised £1million a week for over-running the deadline.
2) Wembley Stadium, London. Originally known as the Empire Stadium it took only 330 days to build and opened on 23 April 1924. Still 6 years and counting isn't that bad???

Comments:
And with the conclusion of the fifth round of the cup, Barry, you have missed the opportunity to comment Brentford's phenomenal cup run for the second year running.

Barry, Barry, Barry... you're becoming such a disappointment to your readers. We had high hopes, but you chose to turn the other cheek to great little teams like the super Bees.

You wait. Promotion is in our grasp and you will be proved wrong as our paths cross and Wednesday are humiliatingly sent back down to League 1.

Oh I couldn't guess who you are. I have 'ignored' Brentford because I need an angle to come from. I am not about to commend every team on a good run/result/signing/managerial appointment. I have also had a request to big-up colchester, which is more tempting as their 'good' run was 'better' than yours, as although both results were 3-1 Chelsea are better than Charlton.
I will not be proved wrong as I haven't said anything *at all* about B/ford (although I may soon). And just remember last time you had promotion in your grasp u got done by Wednesday. So up yours.

yes we all knew it wasn't going to make it, and it's a shame as it would've been nice for west ham to play in the first cup final there!.

what is interesting tho is the amount of bets paid out on the stadium not being ready, £10k they say, and the bulk of the lucky winners we're from around wembley and wearing hard hats!

all that aside it's gonna be a beaut when it is finally finished. we may never hear of multiplex or phoenix electrical again mind!