Will they have to re-name the Disney Pluto? Or will the dog also be killed off? 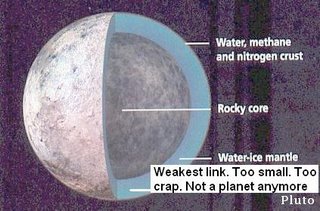 Despite not really being of interest, I thought I'd quickly blog that Pluto is no longer to be considered a planet. It's rubbish, truly the Weakest Link.
Some nerdy anorak stuff about its orbit overlapping Neptune's orbit. Anyway, not everyday that a planet gets downgraded is it?
Rumours abounded that the solar system was to be increased to 12 planets but instead it is down to 8. Proper hardcore planets. Planets you could go to and know you've been to a planet. The kind of planets that make you get down on your knees and thank God you're an astronomer.
Maybe Lembit and his space APPG will demand an instant recall of Parliament? And, of course, the obligatory pointless EDM. But should this kind of thing blow your hair back you can get this Save Pluto t-shirt here. 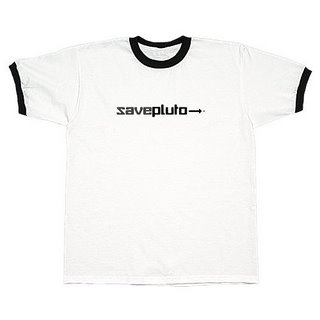 Comments:
i love astronomy. one of the biggest gripes about london is the light pollution - impossible to see anything but the brightest stars and planets.

i'm glad they took the option of downgrading it rather than introducing a new catagory. i mean, if they had known how small it was at the time of its discovery it wouldn't have been called a planet in the first place

Now the big question is - how are the astrologers gonna explain this?

Infact it was called into question because the other celestial body just outside but in orbit is actually bigger than Pluto.

Well, that's simply brought the debate back to the surface. When Pluto was discovered in 1930, they thought it was larger than the earth. If at the time they'd realised it was smaller than our moon, then i doubt it would have been classified as a planet in the first place.