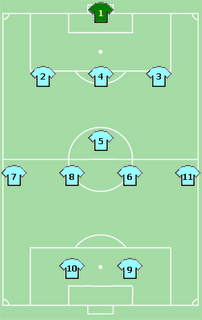 3-5-2? 4-4-2? 1-2-1? I like 3-5-2 especially given that we have a whole load of top quality centre backs and issues with who to play on the right or left (when Joe Cole is injured). Detractors will say it leaves you vulnerable to attacks down the flank, this is true if you play the system wrong: the thing is to be 3-5-2 when you're attacking and 5-3-2 when you're defending.
However, inevitably, there's a mistake. Why would Neville be one of the centre backs? Surely, he must be the right wing back? And given that Ashley Coles is not back to his fittest or best form, it's asking a lot to have him at left wingback. Additionally, do we need to play three centre-backs when Macedonia and probably Croatia will only be playing one striker? Typical cack-handed thinking.
Also interesting that after years of endless barracking Owen Hargeaves has now become the fulcrum of the team. How do you solve a problem like Owen? Carrick will probably get the nod and fair play. He's a good player and frankly we should be able to win both games whoever is there.
In the past couple of days I have also enjoyed the tabloid speculating about Rooney's lack of form. With headlines such as "Crouch vows to help Rooney end goal drought" or "Rio: 'I can help Rooney rediscover his form'"

Comments:
Well, Neville would be in as a centre back so that the team could switch to 4-4-2 without making any substitutions. That being the case, that tactic should really be playing 4-4-2 and then switching to 3-5-2 (/5-3-2) if necessary. Although, once woodgate gets back in the frame, 3-5-2 could be used more as a starting line-up.

Oh, and I'm a bit concerned by McClaren's latest comment that "I am sure Wayne Rooney will explode back to form"