So there are some things that Jews and Muslims agree on? 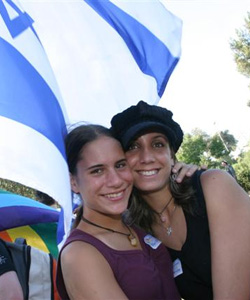 A Jew, a Muslim and a Christian walk into a bar; the barman says "Is this a joke?" Still one of my favourite jokes, but, of course, in Israel a land split by religion and intolerance relations between the Jewish, Muslim and Christian societies are, at best, fraught. However, these disparate communities seem to agree on one thing and such agreement, which should be something positive, is disgraceful even by the standards of a country whose actions and beliefs appear to belie their religious convictions. It would just be too good to believe that people could unite in a cause as worthy as something like, oh I don't know the roadmap to peace or something like that; no the issue that has got them together is homosexuality, or more accurately their shared bigotry in seeing homosexuality as a form of heresy.
The Gay Pride parade in Jerusalem has had anti-humanitarian extremists of all persuasions incandescent in fury, raging like rabied dogs at the prospect of gays promoting such bastards concepts as tolerance and equality. In addition to labelling the event 'sinful' the combined braintrust of the fundamental (note to reader: heavy emphasis on mental) elements of Judaism, Islam and Christianity hold the event to be 'an abomination to the sanctity of the Holy City'.
A modus operandi was agreed under which ultra-orthodox Jews were released from custody in return for rabbis requesting the protest to be lessened to only going to synagogue to pray against the parade.
So when a Jew, a Muslim and a Christian walk into a pub one can only assume it's not a joke, but a no-gay pub.

NB: This is not the only obstacle, however, as there is the heavy possibility of Palestinian retaliatory attacks after the bombing of a Gaza town which Prime Minister Olmert put down to a 'technical failure' in the weapons used. This 'technical failure' led to the death of 18 people.

Comments:
Hey,nice blog!!! I found a place where you can make an extra $800 or more a month. I do it part time and make a lot more than that. It is definitely worth a visit! You can do it in your spare time and make good cash. Make Extra Cash

Hey,nice blog!!! I found a place where you can make an extra $800 or more a month. I do it part time and make a lot more than that. It is definitely worth a visit! You can do it in your spare time and make good cash. Make Extra Cash

Right on the money Mr Beef! I have to say that it irks me (more than Newcastle losing badly) to see so called religious people ignoring the basic religious beliefs from all religions of being good to your neighbour and showing tolerance. Instead there is a witchhunt mentality. They really should concentrate on working out how to live together, not who they hate more than each other!