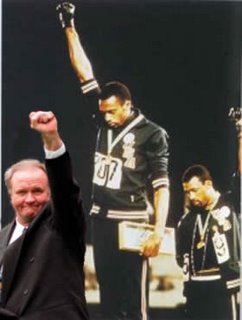 So Bryan Robson, one of the poorest Premiership managers ever, has left West Bromwich Albion or was he kicked out? We'll call it mutual consent.
The forerunners appear to be Alan Curbishley and Kevin Keegan. Watch out for the usual suspects to be wheeled out: George Graham (one last big club...), David O'Leary (they're just kids you know, but they're doing me proud), Glenn Hoddle (disabled people were evil in a previous life) and unusual suspect Gary Megson (I never wanted to leave in the first place).
However, a W.B.A supporting Comrade chum informed me that a name on the shortlist is Mike Wadsworth of Gretna. Hardly awe-inspiring. So how's about Ron Atkinson, or Big Fat Ron or that fat racist as he is affectionately known?
Fresh from a stint cursing through Big Ron Manager and a prolonged effort to figure out what a verb is in Excuse my French, he's available. Although he accidentally let slip a volley about Marcel Desailly (it was an accident that he hadn't clocked the microphone was still on) I am sure another spell of management in the Black Country would be appealing. Lest we forget this is where Big Ron cuts his managerial teeth and where he signed Cyril Regis, unequivocally proving that he is no racist.
To use Ron-glish (my own Ronglish, I hasten to add): It's a Dr Pepper situation, what's the worst that can happen?

NB: The genius photo comes courtesy of the Daily Reckless

aren't Brighton looking for a manager?

Ha ha! Well, since we've just sacked a manager with a better career win record than Robson (40% vs 36%), i feel that Bryan may need to look a little further.

what about Big Ron? He'd love the seaside...