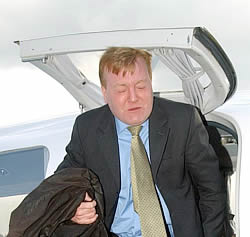 You'd think that having elected the right candidate as their leader and prospective PM, the Tories were moving in the right direction. Au contriare. Enter party-pooper Charles Kennedy. Who says this man is on the edge? He's got a Vote of confidence and is back on it. Not scared of David Cameron poaching his voters, Kennedy cunningly struck back with this beauty of a quote: "If David Cameron actually meant what he was saying, perhaps he's the one who should be joining the Liberal Democrats and the Conservatives should be looking for a new leader."
Yeh take that Dave. This quote is daft on two levels: are the Liberal Democrats, or at least Charlie, attempting to get into bed with the Tories (metaphorically, of course - cos you'd have to be really drunk to do that for real...), or is he saying that all these Conservative voters who think they have finally found their new Messiah are just confused and should have been voting Liberal Democrat all along?
Mr Kennedy promises the Liberal Democrats will come back united and combative in the New Year - a more combative approach is preferred by new policy advisers Jim Beam and Jack Daniels.