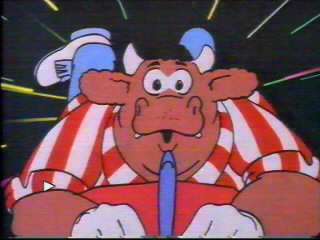 Great news! The return to terrestial TV of my older brother, Bully. I don't have that many memories of Bully, as he was always away mugging up on his spelling. He used to read dictionaries. Seriously, you try to turn the page of a dictionary with a hoof. It's hard work. Bully loved the high life. He even snared a couple of Speedboats when the contestants were uncommonly stupid. When Jim Bowen was cryogenically frozen, Bully disappeared with little more than his Bus Fare Home. However, Bullseye is coming back and have tracked down Bully. Initially, I didn't know how they tracked Bully and then I realised he was still waiting for the bus. Apparently, some tory guy in a pinstripe suit and accompanied by Peter Stringfellow, drove past in a vintage Routemaster, but totally ignored Bully's desperate hailing.
Follow this awesome link to get in the mood for the rebirth of Bullseye.

Comments:
Hey Barry. Nice to see you using your wily journalistic talents in such a productive and amusing way. You style of writing reminds me of that columist in OK! magazine. Keep up the good work hombre!!

Now this was Sunday afternoon ITV entertainment at its best.

Apparently the producers had done a deal with a speedboat muanfacturer, so often they had 2 prizes behind Bully. The speedboat if you won and (probably ) a car if you were just seeing what you could have won.

A truly magical show. What i could never work out was why the "non-darts" players couldn't really play darts (although predictably they could often get higher scores with their scatter gun approach than the carefully honed talents of the amateur arrow chuckers)

Interestingly (in the laxest Steve Davis use of the word) the first 2 episodes of Bullseye were supposedly so rubbish that they were canned before receiving airtime. On one of the shows they won the big prize and subsequently the show was, as fable holds it, nearly ditched completely.

Blogging is really fun but I need to enhance my comfortable blog
Yours is eye catching and will definetly get on my favourites...

I wish you and yourcomfortable blog good luck..:)