Finally, a cut in the NHS 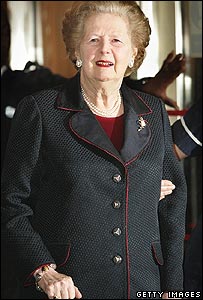 Baroness Thatcher, the oldest surviving Prime Minister, is out of hospital. She was admitted after feeling faint at her hairdressers on Wednesday. Well, that's what happens if you look in the mirror.
On a personal note, I don't like the policies the Iron Lady espoused, but nevertheless it was good to see her leaving hospital (not literally of course, I wasn't there) saying "I'm fine, I'm fine. I feel fine." Alright love, got the idea the first time.
The former Prime Minister, and working class nemesis, had praised the "wonderful" staff at the hospital. Praising the Government (sort of)? Maybe she needs some more tests.
A story like this is not complete without a cheery end, and thankfully Baroness Thatcher's haircut was completed in the hospital (get the headline now? funny, innit?). Although, from the photo it looks like her hair was levelled off with a strimmer. Councils do the same to high hedges.
Rumours that the top of her head now resemble Kevin Pietersen's 'skunk' haircut are unsubstantiated, and quite frankly just made up by me.