A-Force doesn't score an A + 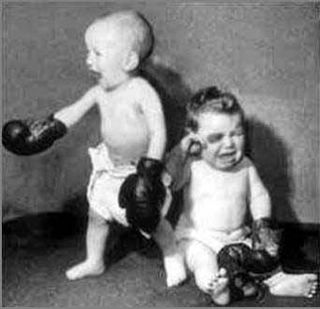 Harrison and Williams turn on a masterclass

Sunday early evening, a stampeding Bull returns home (after a lovely weekend) and goes straight for the video and watches the boxing. Amir Khan demolished his opponent, and then ITV viewers were treated to some inane ramblings from soon-to-return Naseem Hamed. Yes, Naseem praised Amir Khan and has previously said he will never get into the ring with another Moslem. Morality and boxing? Whatever next? Perhaps he will no longer be known as Prince Naseem, but Ayatollah Hamed or Sultan Naseem?
I digress, of course. The main event saw A-Force (yeh that's Audley) and Danny Williams pass off a passable imitation of Morecambe and Wise's infamous boxing skit - circling (well lumbering around) each other with magnificent precision and not throwing punches. (that observation courtesy of my mum - thanks x). Alas I cannot find this photo to post, but shall try. The crowd roundly boo-ed these two out of the arena. And rightly so. Perhaps, ITV taking lessons off X-Factor getting a ratings pasting off Celebrity Come Dancing briefed the boxers beforehand? I can see it now: "Listen lads you are both big, massive men; so mix it up a bit. Don't knock each other's block off, chuck a quick cha-cha in."
Unbelievable a total embarrassment to British boxing. A fact that was compounded by Ricky Hatton not being named in the top 3 of the BBC Sports Personality. On a side note: Ellen Macarthur? What she does is not a sport and, on the surface at least, she has no personality. Highlight of that particular yuletide Christmas treat was the appearance of Pele. Bobby Charlton reminisced saying whenever he saw Pele he was happy and he'd always get a special Pele hug. Well, our kid, I sincerely hope it wasn't after he'd just popped a viagra.

Comments:
Yet she did set the fastest time on Top Gear last week.

Have met her and have to concede the personality point.