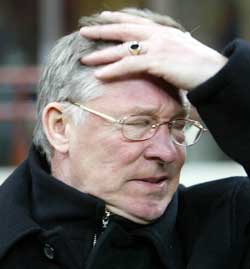 Watched Man Utd last night. And what utter crap they were. Not one to point the finger, but let's cut the bull. This was a long time coming. Some would say ever since he, almost literally, kicked Becks out of Old Trafford. I would point further back to when he got a hissy fit and let Jaap Stam go. Or his total failure to replace Schmeichel decently until this year. Or his failure to recognise Scholes is way past his best. Or that Ronaldo doesn't cross the ball. Juan Seba Veron anyone? Djemba Djemba, so bad they named him twice. £12 million for Louis Saha? And just to rub it in they have missed out on the UEFA cup. And Carlos Querioz? And David Bellion? Yeh go figure.