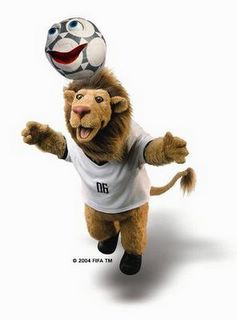 This is Goleo, the world cup mascot. Heidi Klum or Claudia Schiffer anyone?

The world helds its breath. And then BBC viewers, at least, breathed again safe in the knowledge that dear Auntie Beeb had to pad it out for a good half hour yet. Man, this was boring. Eventually, finally the time came to introduce the legends to draw the groups. Enter stage left, Pele (hawking himself around a bit this weekend); Johan Cruyff; Lothar Matthaus and Roger Milla (75). I speak German but am unsure whether there is a different meaning of the word legend as out next came Lucas Radebe; Cobi Jones - looking like the Predator - and Christian Karembeu.
Throughout the draw, Motty deploys a rare combination of endless drivel with unclear explanations to great effect. Thankfully, the volume on the TV just about matched that of the Vicarage Road faithful, i.e. barely audible.
The outshot being England draw Paraguay, Sweden (cue zoom in of Sven's wry smile - "Yes, Sweden this is where I come from and I have sex with Ulrika. We drew them last time too and I did the same face. I bet that Lineker will say something funny.") and Trinidad and Tobago. We should, of course, cruise this group. No justice in the world, however, as Cheese Eating Surrender Monkeys FC really luck out drawing Swtizerland, South Korea and Togo (or should that read "to go"?)
If we win our group (as we really, really should) we'll probably play Poland. For a change. Or Germany. For a change.

Watford vs Sheff Weds at the Vic the other week - Watford win 2-1.

Sheffield Weds have Nicky Weaver making comic errors all over the shop and are heading to the old Div 3.

Wednesday used to have a crap brass band who used to be with England but even they seem to have given up and gone back to their defunct colliery.

Do you actually have anything to shout about???

You silly boy. The point being here is what you almost touch on, but ultimately miss, Watford *DO* have something to shout about. 3rd in the table and quieter than mice.
It is not a juvenile tub-thumping post saying my club is bigger or better than yours. Momentarily this is irrelevant because facts speak for themselves. Currently you are better, and current Wednesday are bigger.
and talking about blundering keepers that joker Foster has hands like frying pans.

Man City have real issues in the goalkeeping department - Calamity James is first choice and then if he gets injured or sent off you get Nicky Weaver.

Talk of frying pans and fires should ensue.

PS Mine is definitely bigger than yours. ;-)