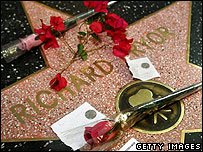 Incredibly saddend to hear that Richard Pryor has lost his fight with MS and passed away at the age of 65. From being born in his grandmother's brothel, to turning into a true trail-blazing comedian. A man never afraid to say anything. A true great. Thank you. Some Richard Pryor quotes:

"I went to Zimbabwe...I know how white people feel in America now, relaxed! Cause when I heard the police car I knew they weren't coming after me!"

"When you ain't got no money, you gotta get an attitude."

"I'd like to make you laugh for about ten minutes though I'm gonna be on for an hour."

"It's so much easier for me to talk about my life in front of two thousand people than it is one-to-one. I'm a real defensive person, because if you were sensitive in my neighborhood you were something to eat."

"I'm not addicted to cocaine... I just like the way it smells."