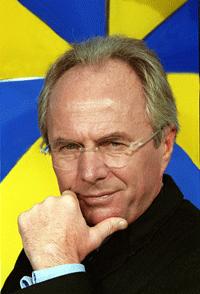 Tonight's the night. England will discover who they have drawn for next year's World Cup. Full-time lothario, and part-time England manager, Sven Goran Nokia has declared he doesn't want to draw English speaking nations, Australia and the US whilst not acknowledging Trinidad and Tobago. They speak English and are about as strong as Liberal Democrat Foreign Policy.
Obviously, the point is will England be in a group of death. In between goring matadors, this Bull has been mulling over potential groups. Worst case scenario would be a group of England, Paraguay, Holland and the US. Not much better would be England, Ivory Coast, Czech Republic and Japan. But given England's recent luck (being seeded 2nd, having an easy qualifying group and Del Boy being knighted) we could well end up with England, Togo, Switzerland and Trinidad and Tobago. Wouldn't lose much sleep if it was England, Angola, the Ukraine and Saudi Arabia.
So many possible permutations. I am sure with Luke Young in defence and a fully-fit again Emile Heskey partnering good-touch-for-a-big-man Peter Crouch the world is the limit. I am sure there are no (Faria) Alam bells ringing.