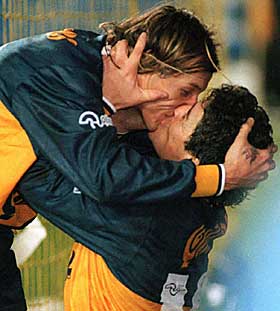 I don't remember the Falklands War, as a mere babe in arms my dislike of the Patagonians was borne by one man and one extremity: Maradona and the Hand of God. You would have thought we were in enough trouble with Peter Reid and Steve Hodge in midfield, but no Maradona, the greatest player I have ever seen, followed up an incredible sensational goal by cheating horrendously.
Come 1990 and up first is Argentina vs. Cameroon. A true David and Goliath story. Biblical scholars may disagree, but for me that battle would have been won even quicker if David tackled like Benjamin Massing.
Claudio Caniggia, a man with flowing blonde locks and quicksilver feet, comes on a sub and goes on a run down the right wing. Enter one marauding Cameroonie who has a good old hack at Caniggia. Playing away from the Argentinian stereotype Caniggia remains on his feet. Only to be scythed by Cameroonie #2 (sorry I was only 11 and can't recall his name). Weeble wobble Caniggia stays on his feet only to be absolutely pummeled by Benjamin Massing. Knocking Caniggia halfway into the crowd. Well thank you Mr Massing from all England supporters. Massing, of course, got sent off and was perhaps fortunate not to get a custodial sentence. Cameroon were then down to 9 men with one of the Biyik brothers getting sent off for another outrageous tackle on Caniggia (to paraphrase Norman Tebbit: On your Biyik). The other Biyik was the goalscorer in a heroic victory for the Indomitable Lions.
Caniggia was suspended in 1993 for 18 months for taking coke. Not relevant really, but just in case anyone was feeling sympathy.

Think the Argentina keeper broke his hand too.

Also worth mentioning that both Cameroon players who were sent off got standing ovations for their sheer bare-faced brutality and desire to ignore the rules.

In fact the Massing sending off was great because 2 other players had tried to scythe down Caniggia on that mazy run before Massing caught him knee height with a 2 footed cruncher and an elbow to the head!

If you are going to take someone down and get sent off then make sure you do it properly. Good work.