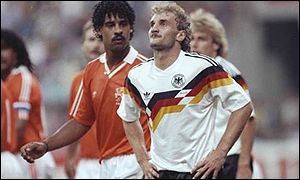 Aside from the Tory Party, the worst thing about the British is their belief that their rivalries with other countries are the strongest. As a case in point, allow me to present Exhibit A: Holland vs. Germany.
To be exact Holland vs. Germany 1990, Round 2. A couple of minutes in Dutch left-back Adri van Tiggelen pole-axes Pierre Littbarski (French sounding name, but definitely German looking haircut). About half-time cue Rudi Voller (a man who now proudly boasts hair, moustache and eyebrows of different hues - and you thought Alistair Darling was odd??? I mean odd-looking, of course) diving and getting Frank Rijkaard booked. Now it must be something in the name but Franks, whether Butcher or in this case Rijkaard, don't suffer cheating gladly. Rijkaard deciding against a dry-slap spits at Voller. Right in that poodle perm. Rudi (Voller - not the kid off the Cosby Show) grasses (not uncommon amongst the Dutch) to the ref who promptly books Voller.
Things are getting tasty, the atmosphere is electric. Achtung, achtung hohe Voltage. Voller then decides to wind-up goalkeeper extraordinaire Hans Van Breukelen. Bad move mein Herr, as Rijkaard grabs him by the ear (somehow not losing his hand in the perm) and like any sporting gent spits at Voller again. This time Voller gets it in the neck (literally). They almost get into a fully-fledged fist fight (alliteration) but before they do, the ref sends them both off. Media reports say they had a fight in the tunnel afterwards. Upshot being Voller suspended for one game (and presumably advised to cut his hair, or at least wash it) and Rijkaard banned for three games. Oh yeh, Germany won 2-1. Click here to read a quite fantastic history of this hatred, "Cheeseheads vs. Krauts: 30 years of Enmity".