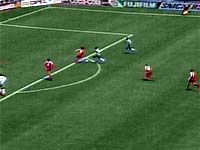 Considered outsiders and not much good, the Saudis entered the final match of their group with a chance of reaching round 2 of the 1994 World Cup. They had to beat Belgium.
Not long on the clock and Said Al-Owairan, the 'Arab Maradona', gets posession in his own half and runs through the entire Belgian defence before slotting past Michel Preudhomme. Simply awesome. The Saudis held on and became the first Asian team to win 2 matches in a World Cup.
In the next round they got tonked by Sweden 3-1, but by then history had been written and the goal of the tournament scored.