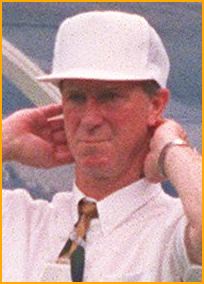 After Ray Houghton's goal vs. Italy had gifted the Irish with their most famous victory, they went into their next match brimming with confidence. The opposition was Mexico. Ireland, for all their heroics and passion, were wilting in the heat and wilting on the pitch where Mexico raced into a 2-0 lead.
Enter John Aldridge to come on a sub for the largely ineffective Tommy Coyne. No worries. Apart from the officials not allowing Aldo to come on. Cue a vast, varied and most certainly liberally applied bout of sustained swearing. Jack Charlton and John Aldridge just let rip for a good two minutes at the fourth official and anyone else in the vicinity. The true beauty of this was that for some reason someone (either Charlton or the fourth official I can't recall) was miked up and the poignancy of their assault was transmitted in all its glory on live TV across the world. Eventually, Aldridge got on and scored a goal, but it was too little too late.

Comments:
Pitchside Mike between the two of them.

Aldridge continued to swear at him for at least a minute or two after coming on too. Classic.