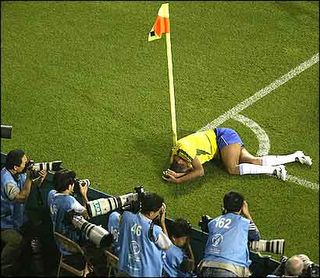 For those of you who do not like football, or those with amnesia, from this picture it would appear that Rivaldo had been pole-axed by a brutal defender. In reality Rivaldo had been hit by a football. All sounds innocent enough apart from the ball hit him on the leg. Rivaldo went down quicker than Sunderland and got the 'offender' Hakan Unsal his second yellow and subsequent early shower, or Turkish bath.
Rivaldo admitted to play-acting, or cheating as we call it, and despite being inexplicably defended by his manager, Luiz Felipe Scolari, he was fined a grand total of about £5,000. To a footballer of Rivaldo's means this is the equivalent of paying for a Big Issue. Brazil won 2-1 and went on to win the World Cup.
Bad, eh? Well try this one on for size. For my money the greatest footballer ever Maradona set an unwanted precedent for cheating. Actually, he is the prototype cheat. Everyone knows what happened. The ref, who must have shared an optician with Mr Magoo, failed to see the most blatant handball ever. Argentina won 2-1 and went on to win the World Cup. 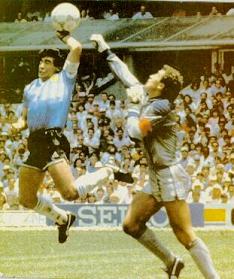 Both players played legitimate parts in their nation's victory. Rivaldo was a wicked player and Maradona, well he won the World Cup on his own. Still cheats though.