Affleck pays in kind for diapers 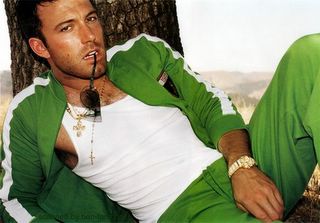 Ben Affleck: an actor whose films bomb more than the Luftwaffe

Ben Affleck found himself out shopping for diapers for his daughter Violet and found himself without any money. "I've got to get these or my wife will kill me" Affleck said. Someone offered to buy his cap off him for money, Affleck refused. Then some woman offered to pay in return for some snogging action. He accepted. What a man! "Sorry I cheated on you but I had to buy some diapers."
"Oh that's fine darling, here's some condoms because Violet needs a new romper suit"
Only in America. It's a shame that Affleck, whose hobbies include marrrying women called Jennifer, continues to turn out such shocking films. Any actor with turkeys such as Changing Lanes; Armageddon; the ridiculously corny Good Will Hunting and Paycheck under his belt can we considered bad. Words fail me when you consider he also has Daredevil; Pearl Harbour; Gigli and Bounce on his C.V.
However, this story is not the latest. Oh no. Not satisfied with such a dreadful catalogue of films behind him (Dogma and Kevin Smith films aside), rumours have emerged that Affleck and his thespian soul-mate Matt Damon are going to film a re-make of Butch Cassidy and the Sundance Kid.

Comments:
Glad to see Affleck still believes in the power of the Lord (check out the bling!)

Wonder if he thinks G_d has been testing him through this difficult period of wankness...

Dogma is a great film - so glad you made that an exception!

Has Alan Rickman ever made a bad film?

I don't like Harry Potter so put that in there. Otherwise, Love Actually must qualify

Have we been reading Women's Own recently ?