Blogger plums new depths (but not in Barrymore's swimming pool) 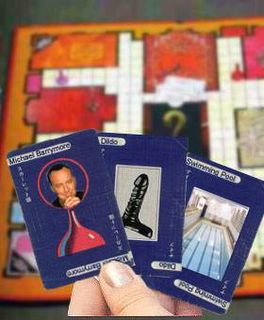 A picture speaks a thousand words

I knew it would happen, it was inevitable. It simply could not go without being recorded. I received the above picture and none too keen to offend my Mum decided not to post it here. That decision lasted a good 5 minutes.
So Barrymore's back. Awright? The man is a disgrace, let's be honest. An exile in New Zealand, Barrymore has decided to come back to our fair shores and sit in a house with luminaries such as Faria Alam (sex with her bosses); Jodie Marsh (nose like a builder's elbow); George Galloway (moustachioed self-obsessed anti-Semite); Rula Lenska (84) and Pete Burns (6ft plus tranny) amongst others.
Ex TV funnyman Barrymore's fall from grace was instant. Off TV, out of the country, out of sight and almost out of mind. Scrap that: out of his mind. He blubs, hogs the spotlight and blubs again. Perhaps a full and candid confession into what happened that fateful night will help Barrymore exercise his demons. Do that and he might just strike it lucky.
As a postscript, I did enjoy the Barrymore/Burns advice giving session to lucky recipient Jodie Marsh. Barrymore said that when he was younger he was given the advice to "keep my mouth shut and ears open", which comes in handy if the police come round your mansion early in the morning and you happen to be hammered on booze and drugs with a young man's dead body in your swimming pool.