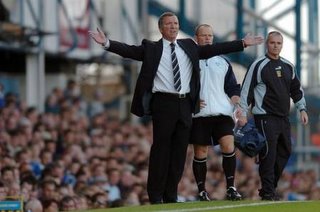 Strike a pose all you want, the Angel of the North you aint.

Despite being informed that this headline has been used by the Sun and by various other hacks/comedians, I am keeping it cos I had not seen it and thought I had coined a funny and original title.
Some people are really bad at their job: the designers of the Scottish Parliament; people who thought the North-East was ready for Regional Assemblies and the owners of my local Chinese restaurant spring to mind, add to this illustrious list: Mr Graeme Souness.
Where do you start? How's about the centre backs Jean-Alain Boumsong and Titus Bramble, a pair of clowns who offer the defensive stability of the Maginot Line. Or perhaps Celestine Babayaro who has turned in some of the most abysmal performances outside of (Fr)audley Harrison. Or could it be the feeling of team unity he inspires? I present Messrs Bowyer and Dyer as a case in point. Or how about £9 million plus for Luque? How's about signing Nicky Butt totally mismanaging him and getting rid of him to Birmingham? The list is endless, but I shall continue. If there is one thing Souey does well, it's p*ss off his star players: during his managerial career players he has forced out of his club are Nicky Butt, David Dunn, Dwight Yorke, Andy Cole and Craig Bellamy.
He was also responsible, whilst at the helm at Southampton, for the unearthing of Ali Dia. This guy entered football folklore when he rang up Souness claiming to be Geroge Weah and selling himself as Weah's cousin! Sound ridiculous? You bet! Souness signed him up, whacked him on the bench, brought him on and quickly subbed him off. He was no good, well actually he was worse than his surname implies and a total fraud, who of course had never met George Weah - never mind be his cousin.
He has also managed teams globally. Lasting a season at Galatasaray. A little longer at Benfica where he brought in such journeymen pros (no diesrespect meant) such as Mark Pembridge, Michael Thomas, Gary Charles, Steve Harkness, Dean Saunders and Brian Deane - it's akin to Barcelona signing Emile Heskey. Ok that's just plain silly. He then continued by going to Torino and lasting four months. He's going round the world like Phileas Fogg here.
His only success was at Rangers where he was bankrolled to high heaven and a F.A Cup victory in 1992, which still didn't save him from the axe at Liverpool. The case for the prosecution rest, m'lord.