England manager? You're having a laugh 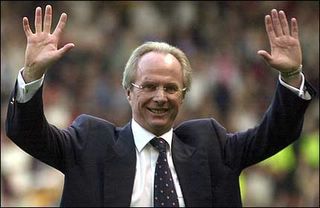 Hands up if you're greedy, naive, over-rated, sex mad and have never heard of Mazher Mahmood

To anyone who has read previous posts on this site, it should be abundantly clear that I have little time for Svennis and I find him ripe for satirising, sadly as I am not that amusing I have to settle for cheap puns and cheaper gags.
Celebrating his 5 year anniversary in a manner to which we have all become accustomed Sven has been caught with his trousers down. For once, however, there were no nubile women around; but rather a fake Sheikh in the guise of the infamous Mazher Mahmood, investigative journalist for the News of the World.
Mahmood, fronting a non-existant arab sporting conglomerate, suggesting buying a Premiership club and installing Svennis as manager. The club in question is perennial under-achievers Aston Vanilla (everybody licks them). Sven was offered a contract of about £5 million per annum and said if he won the World Cup he would be leaving the England post anyway. (But if you don't we are still lumbered???)
Sven said he would be able to get Golden Balls himself, David Beckham, to ditch Madrid for Birmingham (Posh might have taken a little more convincing). He also hinted Michael Owen was unhappy at Newcastle. I can't imagine why? (COUGH *Souness* SPLUTTER *Bramble* CHOKE *£8 million for Boumsong*).
Sven also made remarks about Rooney and Ferdinand. The F.A, never one to shy away from backing the incompetent to the hilt, have given Sven their unconditional support, saying that he was fully entitled to discuss his future. But is he not under contract? Did he not get a massive payrise to stop him going to Chelsea? Indeed, he did; a £1 million rise in his annual paycheck. All he did in response was to give Mark Palios Faria's mobile number (some Sheikh confided in me).
The fact that Sven's remarks are banal in the extreme (would you expect anything else) should not distract that he is showing zero loyalty to his current job and is obsessed by money. The fact that the News of the World continues to act with a remarkable lack of decency is also not relevant here. The problem is that we have a World Cup a matter of months away and bumping off Sven would not help our preparations. Especially, when his assistant is Steve McLaren; who when not holding Sven's umbrella presides over a Middlesboro team that lost 7-0 to Arsenal. The magician's apprentice indeed.