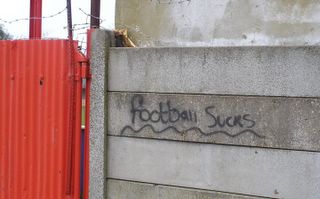 Football is the best. Surely? Well it aint, and don't call me Shirley.
A curious story has emanated from Italy c/o of the Guardian website. Bored of Del Piero, Buffon, Nesta et al the youths of Italy have turned to the WWE. I love wrestling, so this story is manna from heaven.
A random 9 year-old pencil neck geek prefers wrestling "...because it's more dramatic, anything can happen". With all of its glitz and glamour wrestling is attractive to younger viewers. Some say that because the results are pre-determined, wrestling is all fake and rubbish. Fine, fair enough. Don't watch it and problem solved. Or is it?
Like a pantomine baddy enter stage left; Vera Slepoj, president of Italy's national association of psychologists who has claimed there is anecdotal evidence that wrestling had already fuelled school bullying.
Can you imagine? "Give me your lunch money, or I'll powerbomb you through a table and smack you over the head with a trash can lid."
Slepoj continued, "We shouldn't be surprised in a few years if our more vulnerable 15 and 16-year-olds decide to resolve their disputes, in a discotheque or wherever by pulling out a knife." Eh? When are knives used in wrestling? Very rarely, if ever.
Italian national coach, Marcello Lippi recently complained that home-grown talent risked drying up because children no longer played soccer in the streets as they were hooked on wrestling.
Using that rhetoric, perhaps they'll start being good at war again then?
(picture courtesy of www.pyramidpassion.co.uk)