From House of Commons to Big Brother House to Empty House 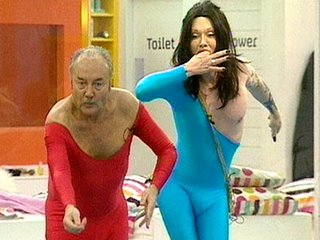 He's back and it's just like he'd never gone - because he's still not in the House of Commons. Real politician, George Galloway MP has returned from his stomach churningly terrible prolonged appearance in the Celebrity Freakshow Circus.
Straight from not serving his constituents, and probably to prove a point, Gorgeous George is on a nationwide tour. However, things look less than peachy for the budding racconteur with more than 800 tickets for his show in Northampton thought to remain unsold with only 34 sold so far.
I know you want to spread your message to the people George, but 34 people? That religious scouse lunatic who hangs around Oxford Circus way ("Don't be a sinner, be a winner") gets more. And he's free.
Actually, thinking about it, Galloway might get a larger audience if he actually takes part in a debate in the House of Commons.