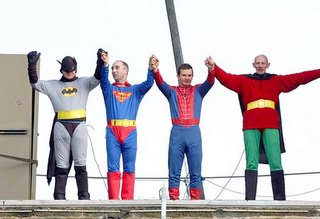 Superheroes rather than super dads

Time gentlemen time. And so to perish with all the dignity normally reserved for a cheat on Who Wants To Be a Millionaire, Fathers4Justice R.I.P.
It is unbelievable that a group that comes from a very sad, and much in need of reform, situation became a bunch of troublesome hoodlums, who should have been given ASBOs rather than access rights to their children.
For me Fathers4Justice showed a plethora of man's most unattractive traits: arrogance, lack of patience, bullying and hogging the limelight. The real tragedy is not the group's demise but moreover the injustice that still continues to exist that single father's are duty-bound to contribute to their child's life fiscally whilst not having the same duty, and in most cases pleasure, of being a part of their child's upbringing.
Things started to go downhill about the time of the infamous purple powder incident, where two condoms full of a purple powder were chucked at Tony Blair during PMQs. This appealed to my sense of humour greatly, but did nothing to further a cause that needed a more carefully planned argument than farce and slapstick. Around this time rumours abounded that some of the main protaganists of Fathers4Justice were sacrificing spending time with their other children to do these silly and foolish stunts. Then followed high-profile trespasses and security breaches at the London Eye; Buckingham Palace, the Foreign Office by Downing Street and Westminster Hall. These pranks, by fathers disguised as superheroes, led the people of the UK to see these people for what they were (most of them not all of them) stupid, little boys who basically sulked when they couldn't get their own way and did their best to disrupt everyone around them. No-one would ever compare Fathers4Justice to the suffragettes, would they?
It even led to the rarest of things - Londoners agreeing with Ken Livinigstone. When a protester in full Spiderman clobber scaled a crane on Tower Bridge Ken said the stunt demonstrated why "some men should not have access to their children". The latest supposed plot - to kidnap Leo Blair - was planned by 4 men dressed as Father Christmas. Former wives and girlfriends of group members have told of violence in their relationships and children witnessing their father's aggression, and Matt O'Connor, the founder of the group, admitted that Fathers4Justice had largely been run by women for two years.