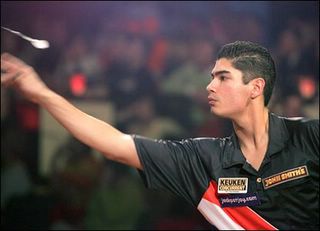 Tony Green's dreadful commentary aside, this year's BDO championship has been a treat. Sadly, I must admit to having missed the final after teaming with my beloved in an ill-fated doubles match. We lost 4-2.
Jelle Klaasen, a hitherto minnow in a sport previously generally dominated by monsters, beat odds-on favourite Raymond Van Barneveld 7-5 in sets to capture the tournament. For a couple of years the BDO was in decline when compared to the PDC, the breakaway federation whose World Championships are shown on Sky Sports.
This year was crucial for the BDO. Frankly, last year's was a disappointment and many felt that there was too little klaas (ouch, bad pun) and that the PDC was far superior. To a point it is, or more aptly Phil 'the Power' Taylor is the best player in the world ever and would beat anyone else 9 times out of a 10.
This year, chez Auntie, after a decidely average first couple of rounds, the trebles started flying in, the averages were high, the doubles hit and the tension was...tense. Whereas across the frequency lengths in Murdoch's glitzy Wonderland Phil Taylor, almost inevitably, trounced everyone in his path to his 13th World Title.
Darts in Holland is massive. And apparently Queen Beatrice was watching (on TV rather than at Frimley Green). It's hard to imagine Queen Elizabeth cheering on Andy Fordham.
Also, Jelle Klaasen is not fat, not even rotund. Darts has evolved a lot from the days of the Not The Nine O'Clock New's infamous, and very well written and acted, parody. We shall now await the biggie, the Parliamentary Darts Championship. Where a range of good-looking lithe combatants (and decidely ugly fellow Bloggers 2darts and Charlton Hofie) will try to beat each other up. Indeed 2 years ago, I fondly recall losing in the First Round of the Doubles with a recently turned 30 years old Blogger, who most certainly isn't fat (although he is shorter than me and weighs more!)

Comments:
I'm trying to think of a smart comback to your description of me as decidely ugly...but I can't, it's true.

Do we know when it will be recommencing? Having not thrown a dart in anger for a long time, i may return. I will, however, need way loads of practice. Way loads.