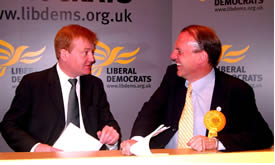 OK so your leader's a drunk. Kick him out. Ever since the members of the Shadow shadow cabinet came to this conclusion things have all gone a bit wrong for the Liberal Democrats. Too Liberal to be machiavellian, or just woefully unaware of the perils around the corner?
Charles Kennedy - drunk. Mark Oaten - how do you sum that up in one soundbite? Simon Hughes - liar. Just briefly, Simon Hughes is gay. But last week he wasn't? Of course not, last week he has lied shamelessly. I fully understand the social stigma of not coming-out and I fear it reflects very negatively on our society that homosexuals do not feel able to express themselves in their professional life. However, what with allegations of phone services used, Mr Hughes has confirmed he has had gay and straight relationships; and he didn't mean to lie and it was all a big mistake and by the way could you still vote for me as Leader (despite the fact I have just lied. A lot. And I'm not in Government yet, although I may never get any closer)
But the plot thickens, and thank you Kerron for drawing my attention to this scoop
I thought it was Charles Kennedy who was the lush?

Comments:
Is it ming, monger or who?
http://fourthterm.net/plog/index.php?blogId=1