...were drawn to determine who Scotland will valiantly be knocked out by. 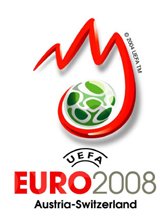 Austria and Switzerland strictly out of bounds for non-English Britons in the summer of 2008.

So here is our first post-Sven group. And, hopefully in a omen of what is to come, we have lucked out massively. Along with footballing pygmies such as Andorra, Macedonia and Estonia, we have drawn Israel (masters of the impressive draw and geographically as European as Pluto), Russia and Croatia (who were one of the first to be Rooney-ed in Euro 2004).
May I be the first to offer my condolences to Scotland for a brave and fruitless campaign, to Wales and the Republic of Ireland for drawing Germany and Czech Republic and to Northern Ireland for being sh*t.
With two nations qualifying from this group, I will put my rump on the line to predict the following to qualify: Portugal, Serbia and Montenegro, France, Italy, Turkey, Greece, Czech Republic, Germany, England, Croatia, Spain, Sweden, Holland (who also have a well easy group) and Romania.