Mark's been sowing his Oats

Before I start, by means of a disclaimer, I hope this whole sorry situation ends as quickly and painlessly as possible for all involved parties. I don't think it will, but good luck.
We thought it was because he only had the support of Lembit Opik, but reasons more sinister explain Mark Oaten's withdrawal from the Liberal Democrat Leader Election. Firstly, may I apologise, I said this campaign was boring, well scrap that; it is absolute dynamite.
In a scoop that I sincerely hope was not obtained by Mazher Mahmood, the News of the World has revealed that Mark Oaten, the balding and happily married MP for Winchester had frequently...frequented a male prostitute - evoking memories of former Liberal leader, Jeremy Thorpe.
The rent-boy said "Before one session he rang several times asking if I'd dress up in a football strip for him. He really seemed to enjoy himself that night." Since the revelation came to light, Mark Oaten has resigned as Lib Dem spokesman for Home Affairs perhaps because as a keen supporter of Watford FC, Mark Oaten clearly enjoys playing away from home.
The rent-boy continued; "When he arrived we put on a show for him. I started having sex with my boyfriend on the bed then Oaten stripped and began pleasuring himself. Then he said he wanted us to degrade him." The naked MP then got the rent boys to humiliate him with a bizarre sex act too revolting to describe. You know the writing is on the wall if the News of the World deems something too revolting to describe. Is this the meaning of 'tough liberalism'.
It also seems that it took the rent-boy months to find out who Mark Oaten was: well he's not on his own there. I think you'd have to be sub-human not to feel any sympathy for Mark Oaten, but a man who last year condemned a judge who was sacked for hiring rent boys has shown either chronic naivety or gross arrogance in standing for Leader.
And the reaction of these three gentlemen was lamentable: 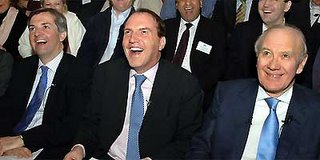 Comments:
Not content with condeming the said Judge last year, Oaten was letting slip the dogs of war on the Government last year over their decision to allow two prostitutes and a maid to operate legally.

Apparently Oaten said he thought the type of people who frequented prostitutes would cause untold problems for other people living in the area.

I am eternally grateful that you didn't mention that being a Watford fan he was used to going down.