Mozart: Dead and Loving It

If only he hadn't died at such a tender, young age (35) Mozart would be 250 today. Tragically, however, he did so today he remains sadly deceased. 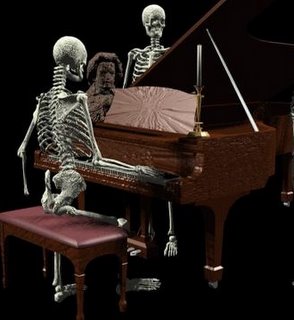 
Apparently, grave-robbers dug up Mozart looking for wealth. However, when they prised the nails out of the coffin and popped the lid off they were amazed to find Mozart playing the piano backwards. Yes he was DECOMPOSING.

I heard that joke years ago and I loved it, but I found another Mozart joke:

Baz Luhrmann was directing a hit film based on several famous composers. During casting he was surprised to be so impressed by Sylvester Stallone and Arnold Schwarzenegger (you know the guy who drives around California without the right bike licence but still gets off free). He asked Sly who he wanted to play, and he replied; "I like Mozart, can I be Mozart?". Luhrmann then asked Arnie who replied "Ja, I'll be Bach."