My next door neighbours a prostitute, get me out of here 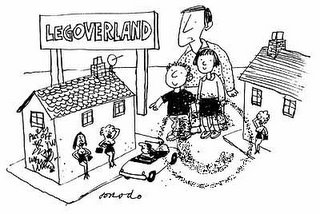 The village bike? Yes, she lives at no. 14 although her friends at no. 59 are cheaper

According to some the Government proposal to permit two prostitutes and a maid working in a single premises will lead to red-light districts, or sex ghettos at I hope opponents will come to label them as. This would lead to the darkening of the country's moral dignity. However, on the plus side it would make for a far more interesting Daz door-step challenge. I'd love to see Danny Baker, Shane Ritchie, Ant and Dec or whoever does the adverts now, knocking on a door offering one box of Daz to be encountered by a 'lady of the night'.
I caught a bit of Question Time last night and the panellists all seemed to be of the same broad opinion; namely that it was fine so long as it was not on my doorstep. The sort of NIMBY argument that oozes out of Andrew Rosindell when anyone mentions Crossrail. That is apart from Labour's shining light, Chris Bryant who (accidentally or deliberately, I am still not 100%) said that he would not want a brothel in his own house.
This proposal should go a long way to tackling deprivation, drug and alcohol dependency and the sex-slave-trade - expect Middle Britain, ably prodded and cajoled to fever pitch by the tabloid press, to go apesh*t then.

Comments:
I doubt that anyone would find the appearance of a real live prostitute all that creepy, but I suspect you have a valid point regarding the sex ghettos. There would have to be a red light district. Without one there's no way to ensure that a whorehouse doesn't open up next door to you and even I wouldn't care to live next door to a brothel.

Good luck with your dilema.

Regarding numbers 14 and 59, can you please tell which street you are refering to. And if you know the tariff , please reveal .

I think it is 14, however, I am fairly sure it is the closest he will ever get to Number 10