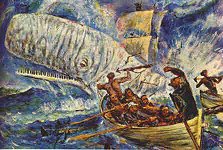 A painting depicting the ugly scene, as seen from the Terrace, House of Commons.

There's a whale in the Thames. Not content with historical offences as having Jonah in his stomach for 3 days and 3 nights and eating Ahab's leg; this miscreant has taken a wrong turn and ended up down the Thames.
The whale is obviously too massive and is running out of water (imagine Celebrity Fit Club - apart from Mickey Quinn - without snacks) so may well die. If it does, whales are edible and a website I found offers a recipe for Marinated Fried Blue Whale (the same site also offers Dolphin Casserole, Spotted Giraffe Pot Pie, Teriyaki Rhino Meat Balls (a common complaint suffered by many), Cat Stew, Pineapple Glazed Manatee and White Bengal Meat Loaf. Who's running this site? Hugh Fearnley-Whittingstall? The question remains: why is there a whale in the Thames? It has always interested (ok that is a massive exaggeration) me that animals no where they are going. For instance birds migrating. So perhaps the whale simply took a wrong turn and considering it's massive girth and lack of an annoying alarm HGVs have for when reversing the poor blighter is unable to move. Destined to settle down, probably in an unhappy marriage, somewhere in Oxford - unless it learns to read and realises it is very lost and thus turns round. Very sad, especially if it ends up in a Council-owned property next to two prostitutes and a maid. Whatever, I am sure it will have a whale of a time.