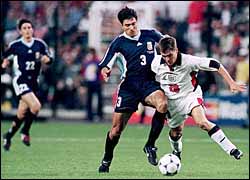 If I ever do another of these hair-brained top ten things remind me to have thought of ten incidents before I start. The one positive thing being that when there is no news about I can revert to type and write about football.
This was the goal that made the world sit up and notice. Michael Owen had arrived. In a warm-up game vs. Morocco, Owen became the youngest ever England goal scorer and had broken the infamous SAS (Shearer and Sheringham) partnership and got a starting place for England.
With the scores level at 1-1, Owen received a pass from Beckham and then ran, and ran, and ran. Bye bye world-class defender Chamot, laterz world-class defender Ayala and pick that one out of the net religious freak Roa (I hope some day to write up a tribute to him). 2-1 England. An 18 year old man-child emerged with two good feet, searing pace and a great shot.
England went on to lose.

It will probably be the next World Cup finals by the time you finish.

Can I also point out that I missed the Owen goal live because I nipped to the loo during the game.

Serves me right, what a goal to miss!