Beef Jerky of the Week 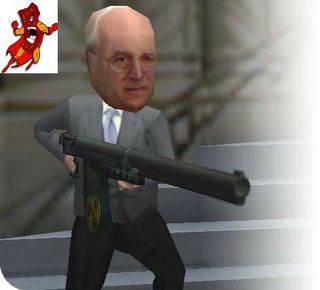 Dick Cheney, a man of vision

As sure as night follows day, there could have been no doubt that this week's Beef Jerky had to be this man, this legend, this Vice-President Cheney. You all know what happened, he went out hunting and, as you do, shot one of his co-hunters. Of course, this was by mistake Cheney having not seen him. His victim, Harry Whittington (78), is recovering in hospital after one of the shots gave him a heart attack.
In a rare moment of humanity, Mr Cheney was said to be distraught. Happens when you shoot people, I guess. Dubya broke his silence today saying: "The vice-president was involved in a terrible accident, and it profoundly affected him. Yesterday when he was here in the Oval Office, I saw the deep concern he had about a person who he wounded." Jeez, then the Iraq War must have shook him up a bit.

Update: It was decided today that no charges would be brought against Dick Cheney.

Comments:
"The vice-president was involved in a terrible accident, and it profoundly affected him."

Not half as much as it 'profoundly affected' the guy he shot, I'm guessing.