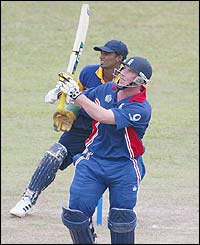 Ashley Giles, a man who has been pilloried and vilified down the years for not being much good, actually came good, or at least good enough. A dedicated professional, Gilo's determination together with his consistency with ball and, equally importantly, bat made him an integral part of the England team. However, he is spazzed, not fit and not on the tour of India. Leaving England with a possible conundrum, actually it is a very apparent conundrum. Who comes in for Giles? The most obvious, and safest, option would have been Shaun Udal (36), who played in Pakistan. Sadly, he played poorly and 3 test wickets at an average of 90-odd does not impress, or fill anyone with confidence. Even more so as one of his three wickets was a very generous lbw decision. Udal, whilst being an alright batsmen, has been out of form with the willow too. Enter Monty Panesar, the new kid on the block. If he plays he will be the first Sikh to have ever represented England and whilst this is an honour he deserves and I am sure will get, I have doubts whether it should be now. Panesar is a bad fielder and bad batsman in the ilk of Phil Tufnell. If he were included it would mean Hoggard going in at 8 and that does not inspire confidence in the slightest. So the answer is in the rather bulky form of Ian Blackwell, captain of Somerset. Blackwell is what would traditionally be called 'a lusty hitter'. He is the best batsmen out of the three and his recent bowling performances would have encouraged Duncan Fletcher to take a chance on him. It seems that England will play one spinner and 4 seamers, so my XI would be:

All the top 4 have been in the runs recently, as opposed to having the runs thanks to delhi belly. Pietersen and Freddie look in alright, if not their best, nick. And all the bowlers having taken wickets. I am quietly encouraged, but still worry about the Indians scoring shed-loads of runs and then Irfan Pathan, Zaheer Khan and the spinners Anil Kumble and the Turbanator Harbajhan Singh cutting through us like a knife through molten butter.
Sorry for the long post, but I am an obsessive cricket fan. So there.

Comments:
it seems almost certain that this is the way england will go. it's about time blackwell started showing some international form, i personally don't think it's ever really bothered him, hence a comment last week 'i'm now beginning to get myself into shape, it's probably something i should've done 5 years ago'!.

blackwell is currently struggling with an upset stomach, something he ate?

half the squad have been down with Delhi Belly. Latest post has more details