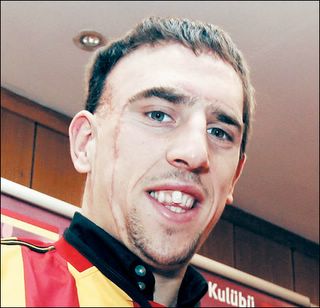 Celine Dion was very happy with the operation

Had the unfortunate experience of watching a whole Bolton game on Wednesday and was treated to Bolton's high-ball, long-ball 0-0 draw with Marseilles. during the match my mate called Sam Allardyce "a fat, whinging slob". Yep, this time it was cast-iron penalties not being given. According to Sam, Bolton have not had a decision go their way since 1973 and his team makes fellow Lancastrian butchers Blackburn seem like ballet.
Any the how the gentleman above, one Monsieur Franck Ribery lined up for Marseilles. He is a white-trash, incestuous version of Gary Neville. Neville on the moonshine juice. And in a story you couldn't even make up (I doff my hat to Richard Littlejohn) Ribery has been linked with...Manchester Utd. So then with Gary Neville, Shrek Rooney, Ruud the half Tramp, half Horse, Paul Scholes, Too-long-neck Van der Saar, Dazza Fletcher and possibly Monsieur Ribery, I'll be sure to pre-reserve my Man Utd 2007 calender.

Comments:
Way to go matey! What next - jokes about stroke victims? Or maybe phthalimide victims? Come on, can't wait for more of your "oh so funny" observational "comedy".