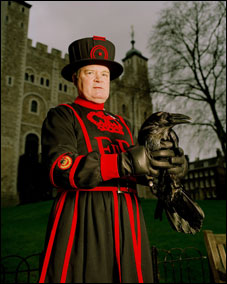 With nothing aside from a rapier's wit and devil-may-die attitude, I am doing my bit to instigate a Dad's Army renaissance. Sadly, this will not stretch to the cast - the vast majority of whom have already shuffled off this mortal coil, but rather to the catchphrases: Don't Panic (see previous post) and We're Doomed (stick with this post). But who to assist me in this most British and honest of all endeavours? Who? How's about H5N1?
It has been announced that the Ravens have been moved inside the Tower of London (Ravens, of course, being poultry???) to avoid being contaminated by (dastardly, chilling music) AVIAN BIRD FLU. None of you, darling readers, will need telling twice: if the ravens leave the tower of London its White Tower will crumble and the Kingdom of England will fall. Its White Tower will crumble and the Kingdom of England will fall. Do or damned really - if the ravens stay put they'll be ravaged by AVIAN BIRD FLU and if they go the kingdom crumbles. WE'RE DOOMED I TELL YOU, DOOMED.
For the raven enthusiasts amongst you the ravens are named Branwen, Hugine, Munin, Gwyllum, Thor and Baldrick. And no, there is not a great deal newsworthy about today.

Yes. And as a prize you get a fatal dose of bird fu.

Does that mean they have a cunning plan to beat H5N1?

You missed out Gundulf and Bran.

The latter is named after Bran the Blessed, who was king of Britain. He was also Welsh. Loads of stuff happened to him, culminating in his head being buried in London. This lead to the legend that as long as his head was in this fair city, Britain was safe from invasion. Bran means "raven" in Brythonic Celtic.

Anyway, i don't know what the fuss is about. Since their wings are clipped they can't flu.

Bran the Blessed? How remiss of me he was excellent as Vultan in Flash Gordon

Since when has Ken Clarke worked at the Tower?