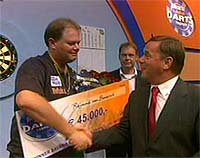 Thanks I've had a lovely time, but I'll take the money and go.

Raymond Van Barneveld has become the latest Benedict Arnold of the darts world by turning his back on the BDO and signing up for the PDC. Barney lost the BDO final in January and immediately denied rumours that he was going to do the offski. This is presumably what is meant by double dutch as he's just jumped ship.
This is a massive nail in the coffin of the BDO, as the majority of the world's elite will now be playing on the Sky sports sponsored PDC. It is a shame because I have very fond childhood memories of the likes of Bristow, Lowe, Wilson, Anderson et al battling it out on BBC. I am sorry to say that today's youth are not likely to have such happy and heady recollections of the current crop.

Taylor should be happy - more competition for him, and it shakes things up at the top.

We may not see another all-Dutch final in the BDO for a while now, but it leaves Klaasen in a potentially very strong position, and - if he develops a personality - there's a player the young can try to emulate.

This is a sad day indeed. The PDC has developed something of a "nuts" and laddish culture which i find a bit of a turn off.

In terms of competition Barney will probably make the top six but is no real match for Taylor as previous meetings and averages show.

Went to Lakeside a couple of years ago and it was like stepping into a time capsule back to the days when the social club was king.

This could be the beginning of the end for arrows as we know it.

I think to most people hes a bigger name than even Phil Taylor given Lakesides free to view access and the PDC being a bit far removed to most of us terrestrial TV owners on Sky Sports.

I think this is a massive blow to the BDO. This years tournament was dire. The discovery of Klaasen being the only good thing about it. They really need to hang on to him now as he is their only saving grace.