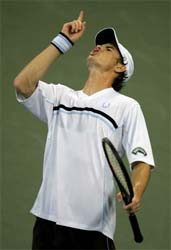 Murray putting the great and good to the sword

What with the total shower that is the Winter Olympics, salvation is at hand for sporting fans. In the form of one Andy Murray. The man who shot to national prominence last Summer has continued his astronomic rise through the world rankings by winning the SAP Open in San Jose beating Llleyton Hewitt in the final (Tim Henman has been licked by Hewitt on loads of occasions) and Andy Roddick (not the bloke from Body Shop) in the semis. We now have 3 players ranked in the 40s with Messrs Henman and Rusedski at #40 and #43 respectively having their necks breathed down by Murray at #47. It promises a lot for British tennis, which despite the last decade's relative success of Henman and Rusedski, is still a bit in the doldrums. Not that either Henman or Rusedski should be blamed: it's not Henman's fault he's posh and it's not Rusedski's fault he's Canadian.