Is this the worst #6 Premiership Top Scorer ever? 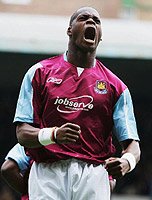 Marlon's got a lot to shout about

Sorry for the convoluted title of this post, I didn't know how else to phrase it and let's face facts; much like Ronsil, it does exactly what it says on the tin. Last night West Ham trounced Birmingham 3-0. And Marlon Harewood kept up his impressive record this season by bagging a couple of goals. I have had a soft spot for Marlon ever since he was mistakenly referred to as Malcolm Harewood on TalkSport. The thing about Marlon is, is that he is not very good. Watching him last season, I'd even have said he was very bad. His current partner in crime up-front for the Happy Hammers is Bobby Zamora - who also sucks. However, they both keep on scoring and Marlon now has 12 goals this season putting him 6th in the scoring records. Spookily West Ham are also 6th.
After comprehensive research into the subject looking for players who have finished 6th or higher in the scoring charts (Premiership years only) but are worse, obviously in my opinion, than Marlon Harewood, I have discovered: Hamilton Ricard, Marcus Stewart and Andy Johnson.
What odds on Marlon being Premiership Top Scorer? Marlon firing West Ham into Europe? Marlon being in Sven's summer squad? Funny old game, innit?

Comments:
What a calumny! I'm at Upton Park for every game and Marlon has been superb this season. Yes, he can be frustrating at times, but unlike Peter Crouch he actually scores goals. 13 in 25 games so far. Not bad, eh?

Excellent word sir! Calumny, I ask you. I am happy Marlon's doing well, I hope he continues too and I like the guy for the good charity work he does. But if he gets anywhere near the World Cup squad the world has gone mad.
I don't think Marlon or Zamora are Premiership class, but you are right; you cannot argue facts. They have scored. It's a tough call.

Of course Peter Crouch should be going to the World Cup - he plays for Liverpool (let's not think about the fact that he is rubbish)! Typically Sven will be choosing his squad using his friends and old favourites as opposed to the form players (read current best English players).