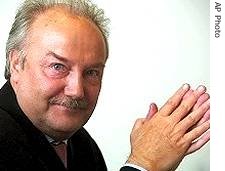 How good was this story? I don't care why he was incarcarated, I am just happy he was. Tragically, he was released and he has been let into Egypt. What other notorious news agencies have surprisingly missed is that this was the pilot episode of the Egyptian Big Brother Pyramid (hosted by Sheikh Davina Al-Mccall). With Galloway's release the showed was axed, producers and executives alike realising the idea sphinx.