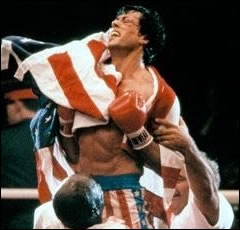 Great news! The man is back! Rocky Balboa. The Italian Stallion. Actually, the EYE-talian Stallion. Big, bad Rochester. I can hardly contain my excitement. Seriously, buying all 5 Rocky films on 1 DVD off some Oriental chap in the pub was the best £5 I have ever spent.
Whether it's Apollo Creed, Clubber Lang, Ivan Drago or Tommy 'Machine' Gunn Rochester wins out. Let's get the sad stuff out of the way: Rocky is now nearly 60. Adrian is dead! No sh*t. So if he wants encouragement he's either going to have to shout louder or get an Ouiji Board. His son had dissed him (by the way Rocky V is excellent for very funny early 90s bullying), Mickey's still dead and there's no sign of his dog Butkus (Hey yo Butkus!). The bad guy is Mason 'The Line' Dixon, played by Antonio Tarver! This is going to rock! And if you weren't excited enough, not only is Sly the lead and Director, he has also written the screenplay! Oh happy days.
Just to get you in the mood here's some of Rocky's most iconic quotes:

ROCKY
"Why do you wanna fight?" -Adrian
"Cause I can't sing or dance." -Rocky

ROCKY III
"What do you think of Apollo training Rocky?" -Reporter
"Apollo who?! You talkin about that old fool Apollo Creed?" -Clubber

ROCKY V
"You knocked him down, why don't you try knockin me down now..." -Rocky

Update: When asked if this would be the last Rocky in the series, Stallone answered that it would be saying that any more would not be practical and besides he wanted to make another Rambo movie. Jeez, the Rambo films are so old that Afghanistan were the good guys.

Comments:
Off a man in a pub? Was it really 5 films on DVD - or has it subsequently turned out to be a bag of spuds?

Which incidentally have slightly more acting talent than Stallone in the Rocky series.

Don't go slagging off Rochester. It was 5 films on one DVD. I am sure it is very legal and I am equally postive the fact the guy spoke absolutely zero English outside of "Five pounds" was purely coincidental.

"I see freee of em out there"