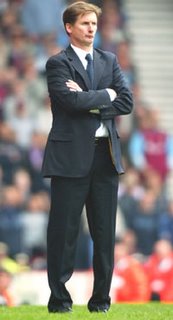 Some things are puzzling. How does Pete Burns look in a mirror of a morning and think he looks good. How did Mark Oaten think he could get away with it? And, of course, puzzles. None, however, are as incredibly perplexing as a return to management (make that Premiership management) of Glenn Roeder. Glenn, for the uninitiated amongst you, does not have the most successful of pasts. Indeed, his track-record is about as impressive as that of a Scottish sprinter.
In his first managerial stint, at Gillingham, Roeder amassed a woeful record of 13 wins out of 51 matches. He then follweod this up by getting the sack at Watford and getting West Ham relegated. He also got sacked.
I am very happy to see Glenn has recovered from a brain tumour and wish him good health. That being said I hope his appointment does not become permanent. Basically, if he can sign one or two defenders the team should be good enough to stay up by themselves.
I would be amazed if Roeder does not fail spectacularly. Interestingly, Roeder has the smallest mouth in football and also enjoys standing on the touchline with his arms crossed. Loads.

Comments:
As a West Ham supporter I have fond memories of Glenn Roeder...

But because of his brain tumour he'll probably get a great response when Newcastle go to Upton Park. Fancy old world.

I don't think we bear a grudge against any of our ex-managers, not even the one we really should resent for being proved useless.

But thats only because it would weaken the reserves of grudge needed for Paul Ince.

Roeder is a fine manager. He did great things at Watford...