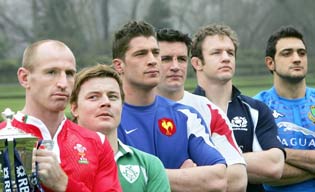 Before I write this article it would only be fair to say I don't particularly like rugby. Growing up as a young Bull (or is it a calf? I have no idea or interest) rugby always struck me as what posh blokes with a unnatural penchant for violence partook in. I also smirked continually (literally non-stop for about a week) as England temporarily became cloaked in Rugby-mania after winning the World Cup. After a couple of days it became very apparent that whilst it was great to be world champions, only the diehards actually cared. I watch rugby quite regularly and like nothing more than watching grown men attempt to maim each other on a pitch that closer resembles a bog. Particularly if that grown man happens to be a cheese eating surrender monkey, so imagine my joy when my co-worker, a lovely Scot, texted me excitedly informing me that Scotland had beaten the French 20-16.
I do use this site as a platform for bashing the Scots. Or more aptly bashing their sporting impotence (curling and tossing the caber aside). So I'll re-dress the balance here. Well done. No-one really expected them to win, even those See You Jimmy look-a-likes with their hilarious ginger-wig and tartan combo. Before kick-off, the French were favourites not only to win this encounter but to win the Grand Slam. So it is an immense achievement.
And if things couldn't get any sweeter for the sweaty socks, who stands to benefit the most? Of course, it is their beloved neighbours the English. Nice one, fellas! And whilst I'm having a go let's have a dig at the the Welsh for getting stuffed by England. Still, they do sing their national anthem beautfiully. A chum of mine, a certain Gutbuster, was present stuffing his face with burgers. It seems the real feast was on the pitch. I would gloat more, but let's face it...who cares?

get some sleep goddammit!