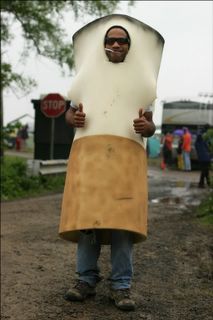 Common sense prevailed and smoking will now be banned in public places and work places with no exemptions. Determined not to praise anything the Torygraph has the following pertinent questions:

Q. What does the new law do?
A. It bans smoking in all enclosed or substantially enclosed public places and workplaces.

Q. Such as?
A. Bars, clubs, restaurants, cafes and offices. These may seem obvious and there are many in which bans already operate, for instance trains, buses, shops, schools, sports centres and cinemas. But the Government also has powers under clause four of the Bill to extend the ban to particular places or types of place if there is doubt over their status.

Q. Is a vehicle an office?
A. Yes, if it is used for work. However, it is more complicated than that. A delivery van will be covered by the ban if the driver does not own it, but not if he does. This does not apply to a taxi. Also, if the van is shared it will be covered even if one of the drivers is the owner.

Q. What if the lorry is foreign-owned from a country where there is no smoking ban? Can the driver therefore smoke in his cab?
A. Er …

Q. What if a plumber visits your house? It is a place of work for him but your home. If you are happy for him to smoke, is that all right?
A. The Government says: "We are not defining the person's home as a workplace." So the plumber could light up if you approved. But could you smoke if he disapproved? It is his place of work, so he would be entitled to ask the owner not to smoke because the law makes it an offence to fail to prevent smoking in a smoke-free place.
On the other hand, someone who works at home but in a way that involves the public - for instance, a piano teacher - would be allowed to smoke, even though, strictly speaking, it is also a workplace.

Q. Are all private homes exempt? What about stately homes that are open to the public or a GP's surgery where the doctor lives?
A. The Government says that if the house is open for only one day a year and is not a person's workplace, it will need to be smoke-free only for the period when the public may be present. But what if the home doubles as an estate office?
Also, premises where members of the public go to give or receive goods or a service, including for example a solicitor's office or a dressmaker's shop, will be smoke-free at all times. But if they are also private homes, only those parts used for work purposes, including a waiting room, will have to be smoke-free.

Q. What about workplaces staffed by volunteers? Are village halls and community centres sorting clothes for a bring-and-buy sale on a voluntary basis "workplaces"?
A. Under the new law, the word "work" also constitutes voluntary work, so even if a village hall is being used to hold an event that requires volunteers, such as a scout meeting, it will still have to be smoke-free. The hall would be both a workplace and a public place.

Losers. Much like MERCHANT OF DEATH company Forest whose director Simon Clark declared: "People will continue to smoke and the idea that people are all going to give up smoking simply because they can't smoke in a pub is nonsense." With such belligerent and condescending arguments it is hardly surprising they had their collective smoky ass whooped by 200 votes. I actually went to a pro-smoking, pro-ventilation meeting and was amazed at the assembled tossers present (yes there were, at least, half a dozen Tory MPs). Their attitude was basically that all health campaigners were a bunch of puritan zealots (that term was actually used) and that it was infringing on civil liberties so yaboo-shucks and let's have another drink and rummage around in our humidors.
Other personal highlights included this quote from some demented Irishman: "That ban was the reason I left Ireland. If they introduce a ban here, I'll have to move somewhere else." Oh well Britain's loss...
And let's not forget Stephen Pound, MP for Ealing North, who was in his usual piss-taking top form insinuating Lynne Jones was a 'fag-end'; saying he would not like to ban Lembit Opik; advising Liberals not to take up habit-forming pursuits like making legislation and questioning Andrew Lansley's honourability. Even if what you said was wrong, the way you said it was wondrous.
And finally, well done to an unnamed gorgeous health charity employee on this victory. Without her, I might still be a filthy smoker myself.

Comments:
Reformed smokers are the worst

Not as bad as unreformed smokers

Ummmm are you REALLY a reformed smoker ?

Just about the only non-smoker in the S&S

I think James of Hendrixville told me otherwise.

This comment has been removed by a blog administrator.