Stuck in the Middle(sboro) with you 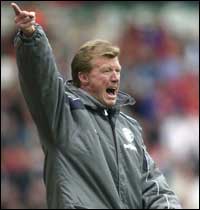 Maybe Souness won't be the only manager leaving the North-East?

It was with enormous satisfaction that I heard the news of Graeme Souness getting the sack. Not that I dislike him (I do, but this isn't the reason) but because I had called for his sacking and can only assume that Freddie Shepherd reads this blog. Similarly, I hope Steve Gibson is reading this.
It is unbelievable that McLaren has been mentioned in the same sentence as the words 'potential successor to Sven as England manager'. Having recently displayed his managerial nous by overseeing Middlesboro's 7-0 demolition by Arsenal, Steve once again displayed his shrewd tactical acumen by watching his team capitulate to Aston Villa to the tune of 4-0.
Steve Gibson, Middlesboro's chairman, has ploughed in millions and millions but has had some right turkeys as his managers. Bryan Robson, whilst currently enjoying a renaissance of sorts at W.B.A, under-achieved gloriously with numerous seasons of disappointment and such stellar signings as Branco. Remember him? Now he has McLaren a man who splurged £8.1 million on Maccarone (not cheese).
However, some light relief has come from the fans and media alike. The Times wrote of a 60 yard run weaving past 3 players at great pace - sadly it was the supporter who passed the (probably sleeping) stewards to run to McLaren and chuck his torn season ticket at the hapless manager. Further laughs ensued with a block of disgruntled Boro fans starting a 'McLaren for England' chant.
For my money McLaren is the most over-rated manager in the Premiership and his P45 may well be in the post before the season's out.