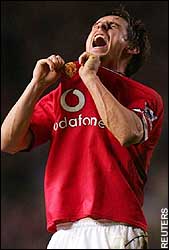 Franck Ribery and Phil Neville's better looking brother, Gary has been found guilty of improper conduct and fined £5,000. That's it boys. The F.A, fearless and never afraid to court controversy, has fined him a minimal percentage of his weekly wage. That'll learn him. A typical gutless display there.
What Neville did was irresponsible, I believe he did it because he genuinely despises Liverpool - and everything is stands for. It's not like he hides his hatred though: "I can't stand Liverpool, I can't stand Liverpool people, I can't stand anything to do with them." Once when Man Utd players had heard Stevie Gerrard was injured it was Gary Neville who piped up "Shame it wasn't Michael Owen"
His loathing of Liverpool is not a secret, his actions - despite the most obvious of obvious protestations to the contrary by...who else?...Sir Alex Ferguson - blatant. So why is the punishment so minimal? Whether players should be allowed to do what they want on the pitch is an entirely different issue, but if it is on the statute book that what Neville did constitutes an offence there must be a more suitable punishment. Not even a one match ban. How do you dissuade players from provoking potentially ugly scenarios? Easy: do whatever the F.A don't.

Comments:
Barry, you may be oh so wrong about the Super Bees. But you are oh so right about this idiot.

If I got fined 10% of my week's wage for such an idiotic thing i'd think myself very lucky indeed - in fact I'd think myself lucky not to have been sacked.

You'd never see any provactive behaviour from me, either.

Good to see you made it back man.

gary neville is a poncy little gormless twat manc, what he deserves is to be put in amongst the liverpool supporters....

ahh who cares he loves his team, and he hates the scousers so... :P